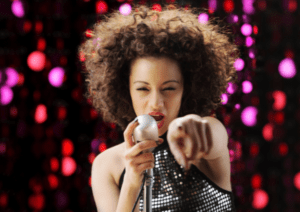 Everyone to climb on stage and sing your own song. While thousands of bands are screaming, your name will forget American idol tree. I’m going to show you the way to music royalty. Grab your mic. This is Epic. How to become a pop star.

It sounds obvious, but you’ve got no hope of becoming a pop star if you don’t know how to sing, so sign up for some vocal lessons. Learning the fundamentals of the proper vocal technique will be invaluable when you’re inside the studio or out on the road or on a stage singing live, which is the best when you can do it well, which you can’t, which is why you’re here. You’re going to learn a lot from a bulk of coach, but one of the most important things you’ll learn is how to breathe. You’re going to want to breathe in through your nose and out through both your nose and your mouth. Imagine a ring around your torso and when you breathe in and try to push that ring out, keep your facial and throat muscles relaxed and both your ribs and shoulders up and relaxed as well.

How to become famous and popular

Once you get the hang of it, you can step your game up and train like Beyonce. She works on her breathing by singing while running on a treadmill cause she baller. Now singing is half the battle. You’re not going to be a pop star without some sick dance moves to back it up. Just like with singing, sign up for dance classes. You dummy, you can’t dance. Let somebody teach you don’t know everything and you’re going to want to learn hip hop dance as it’s the style most utilized by today’s pop stars. Even the white ones. Cultural appropriation. One technique you’re going to definitely want to master is popping. Popping is when you contract and release your muscles to create a jerky pop like effect. I could not sound anymore like, I don’t know what the F I’m talking about. To practice this, put up both your arms and tighten your muscles.

Hold that for a few seconds and then guess it. Yup. Release. Try doing it faster and faster with the shorter duration between the contraction period and then the release. Eventually the technique will become second nature though. I still can’t do it, nor will I try in front of you did it. Now your vocal skills and your dance moves are only going to get you so far. You’re going to need to get the attention of fans and record producers. So release the sex tape. Nope. That, Nope. Nope. Wasn’t supposed to say that. We’re gonna move on. So what kind of songs should you write? A 2011 study from Rutgers mapped out top billboard chart hits to discover what elements make up a popular song according to their findings. Successful pop songs have an average of 119.8 feet per minute and are high in energy and volume and have a relatively unchanging tempo.

Can anyone be a good singer

Making them easy to dance to. According to SIA, who’s written pop songs for artists like Beyonce and Christina Aguilera, songs that do well tend to fall in either of two categories, victim to victory or party time if you can, if you can get them both. That’s great. Victim to victory songs are basically about how things are bad, but now things are good. While the verses might be sad. The chorus is powerful and uplifting. This is every fricking Katy Perry song except for her other songs which are party time songs, segway party time. Songs are about how much fun it is to hang out at a party. They’re very dancey, very simple and catchy and all about living in the moment like there’s no tomorrow.

Whatever the category, you’re going to want to keep things simple with a clear and obvious metaphor that’s overall positive. Now you’ve got that hit song and you’re going to have to get it out into the world. Luckily for you, you’ve got the perfect way to do that and you’re using it right now to read this post starring me. Joe Beretta, the handsome guy. You’re using the internet, you smart son of a bitch. A Dell first became famous after she uploaded her demos to where my space, the songs were heard by executives at London label Xcel who signed her and went on to produce her first album, 19 critical success. It’s a very delightful listen. Justin Bieber was also discovered by the internet.

Oh, that hurt. When the weekend started uploading his songs to his YouTube channel, they eventually found their way to Drake. Drake shared them, which led to coverage by Pitchfork in the New York times and that gave weekend a path to start them. But if you think you’re going to be a big-time pop star by just throwing a few videos on YouTube, think again Buckaroo it’s playing live shows, not album sales that provide musicians with the bulk of their income. So pack your bags and get ready to tour and say goodbye to that solid relationship with your wife. She says that it’s okay, but when you’re gone that often things start to deteriorate and you need to communicate better than you’re communicating. When you’re out on a bus with a bunch of people that you like, you’re not, they’re not my friends, babe, they’re my co.

What? No, your marriage is screwed. The good news is that setting up a tour isn’t as complicated as you might think. You don’t need a manager or a booking agent. All you have to do is decide on dates you’d like to tour and map out a route that’ll circle you back home and contact venues in each city. Start small, and as your fans grow, you can move to bigger venues and longer tours. Just don’t expect to get rich. The average full time musician makes $62,757 annually. That’s not too bad, very specific, but it’s a far cry from a millionaire. Of course, if you’re a megastar, you can make a lot more than that. In 2016 Taylor Swift reportedly made 107 $170 million making her the highest paid entertainer of the year. If your music doesn’t gain traction on the internet or endless touring until you make it rich, doesn’t sound appealing.

Don’t despair. There’s another way to become a pop superstar sex tape. Nope. Just write songs for him. The other pop stars write their songs until they release a sex tape. No more sex tape. No more reference. Okay. No Bureau of respectable human being. Just look at SIA. I’m a musician in her own right. Do thousand 10 see a retired from being a solo artist and started writing songs for other musicians she wrote. Get ready for this list. Rihanna’s diamonds Neos. Let me love you until you learn to love yourself and wild ones with Flo rider, Florida, Florida. Flo rider. This success led her to release her own single chandelier in 2014 where that little kid was dancing lock desk batter. The song was a worldwide top 10 single and reached number eight on us billboard hot 100 lists. That thing still exists.

Look at that. You did it. You’re selling out arenas all over the world, singing your number one hit single and you’re the next big thing all because you took my advice and you made a song about sucking out a party and then be an awesome at a party and it was three minutes of awesome gloriousness. There’s nothing that’s going to stop you except perhaps the next big thing that’s right on your heels. She’s younger, she’s sexier, and she’s already being just predatorily pushed to all over the world by, by her parents and a management team. They don’t care about her care about the product. She’s not a product. She’s a person. Okay, but good on you. This has been Epic out to let us know what topic you guys think we should break down next in the comments below and don’t forget to subscribe.

How do you become an international singer?

Can anyone become a famous singer?
To become a famous singer, sing in public places, like at talent shows or karaoke bars, as much as possible so you get more comfortable being on stage. You can also take online or in-person singing lessons, which will help you develop your voice and be more confident.

What skills do you need to be a singer?

Determination, perseverance, self-discipline, self-confidence, and the ability to face rejection are all traits that singers must develop

How do I market myself as a singer?

How does a singer dress?
Remember, moving your body enough to breathe is important when singing. Some items that may make it harder to breathe include snug gowns, pantyhose, cummerbunds, and bowties. If your performance attire is formal, the length of the gown or tails on the tux may require that you practice sitting down in the outfit.

What is pop music used for?
The term “pop music” can be used for all kinds of music that was written to be popular. The word “pop music” was used from about 1880 onwards, when a type of music called music was popular. Styles of pop music in the 2010s (today) include rock music, electronic dance music and hip hop.

Who is the biggest pop star of all time?
Michael Jackson was a major international pop star when he was very young and he was probably the most popular singer in the world for at least fifteen years between, say, 1982 and 1997.